This Sunday morning saw the last times the current set of ropes will ring out the bells of All Saints Church.

The current ropes, with the exception of the Number 4, were replaced when the bells were rehung and augmented it late 1999. The rope on bell No. 4 broke three years ago and a replace was brought over from Gressenhall.

Over the past year and a half, the ropes have started to show their wear with bell No. 5 in particular starting to fray. The decision was taken to replace all 6 ropes, with one rope going over to Beetley to replace a recently broken rope, and the remaining 3 being retained as spares (rope No. 5 will be removed).

The mystery of the odd struck four has been solved! Over the past few weeks the number four has been becoming increasingly difficult to ring. An inspection of the bell found that the clapper had worked itself loose and was therefore spinning around in the bell.  A quick tighten of the bolt which holds the clapper and the bell seems as good as new. The real test will be Friday at the practice night. Further inspection also found that then tenor bell was also suffering the same problem.
Posted by Unknown at 09:57 No comments: 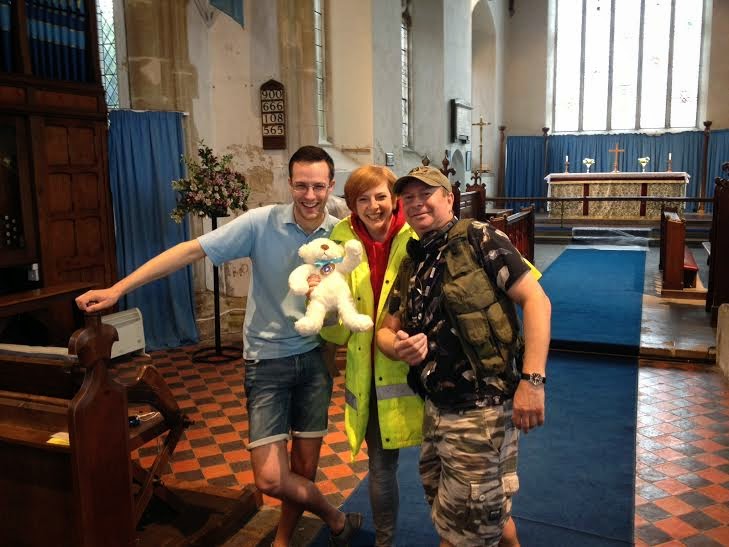 We would like to thank everyone who came along to this year's Teddy Bear Zip Wire at All Saints Church. Despite the awful weather conditions a great day was had by all. The afternoon started with a special visit for the BBC Radio Norfolk's Treasure Quest team who came to find the treasure which was a special bear name "treasure Bear".

This year me made a record £372. This money will be split between the Bell Ringers to help maintain the bells of All Saints and the PCC for the restoration of All Saints Church.
Posted by Unknown at 18:00 No comments:

A small number of ringers took on the mammoth task of cleaning the three chambers of All Saints' Tower. Sarah Seaman, Shelia Smith, Mark Tweedie, Lee Fox and Aaron Hall swept, hoovered, dusted and polished the Tower throughout the four hour cleaning marathon. The result was a spotless tower in which in will be a pleasure to ring.


The ringers also took the opportunity to treat the six ropes in the tower with rope lubricant, to help preserve the ropes. This was a rather messy job but good fun. The ringers got to ring in their tidy tower on Friday. Click here to see some photos from the day
Posted by Unknown at 02:16 No comments:

Email ThisBlogThis!Share to TwitterShare to FacebookShare to Pinterest
Labels: maintenance

As the last few minutes of 2013 ticked away the bells of All Saints rang out to wish it farewell and as the year faded out so did the bells. On the stroke of midnight the tenor bell struck 12 before the remaining five bells joined in to sing out joyfully to welcome 2014. Some beautiful rounds and call changes were rung with one or two ringers breaking out in a sweat due to the speed of the ringing! Once we finished ringing a bottle of champagne was produced and with a loud pop the ringers toasted in the New Year. Then came another tower tradition the singing of Auld Lang Syne in the porch!
The New Year band consisted of Ted Conyers, Mark Tweedie, Helen Watson, Fiona Joisce, Richard Joisce, Janet Pender-Cudlip, Michael Pender-Cudlip, Lee Fox and Tower Captain Aaron Hall. Victoria Joisce took on the important duty of Time Keeper!
Posted by Unknown at 00:00 No comments:

Sunday,15 December, 2013
The ringing which took place prior to the Christmas Carol Service was sponsored in memory of Brian Peebles, who passed away 15th November 2013 aged 66. The ringing was sponsored by his niece Gillian Hall, whose son Aaron is Tower Captain.

The ringing which took place prior to the Christmas Eve Christingle Service was sponsored in memory of Margaret Batten, who passed away 29th October 2013 aged 64. The ringing was sponsored by his niece Gillian Hall, whose son Aaron is Tower Captain.
Posted by Unknown at 05:20 No comments: